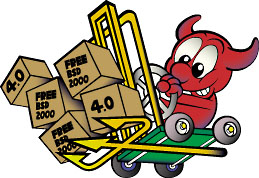 Convert Ports Management from Ports to Packages on FreeBSD

The FreeBSD Ports system is very effective but costly in time to upgrade applications especially if managing a large number of servers.  With the advent of FreeBSD’s new package system – pkg and Poudriere, package management can be customized similarly to ports with the ease of upgrading via pkg.  This post demonstrates the steps require to convert a machine from utilizing ports to pkg.  If Poudriere is not desired, this guide is still applicable minus the Poudriere setups.

END_OF_DOCUMENT_TOKEN_TO_BE_REPLACED

Recently, a ssh session terminated while editing a text file.  Unfortunately, tmux was not utilized and the session ended abruptly.  Not giving it much thought, the server was rebooted and during the dmesg output, the following message was produced: “recovering vi editor session”.

After searching the internet, I discovered vi saves its session by default in “/var/tmp/vi.recover”.  Since the saved sessions were not need, the contents of the directory were deleted and the resulting error message on boot up disappeared as well.

Just the other day, the following message appeared on my FreeBSD 10 virtual machine when first booted up:

Ever installed a port from the ports collection only to find out it pulled-in an unwanted version of a dependency?

Make.conf is used to provide flexibility in the process of compiling sources, documentation and applications.  It provides the user a means to override the default values or variables. END_OF_DOCUMENT_TOKEN_TO_BE_REPLACED

Ever found yourself making mistakes/changes in rc.conf or other configuration files then only to find the server boots up and the file system is read-only with the following message: END_OF_DOCUMENT_TOKEN_TO_BE_REPLACED

Just as in Shakespeare’s Hamlet, “To be or not to be, that is the question – Whether ’tis Nobler in the mind to suffer“, do you suffer whether or not to include src, docs, and ports when performing a fresh install of FreeBSD 10? END_OF_DOCUMENT_TOKEN_TO_BE_REPLACED

When installing FreeBSD there are several items to configure manually during the install process.  One of the first items to manually configure is the disk partition layout in FreeBSD.  Since this configurations will be utilized on production servers, the partition scheme is laid out in a specific fashion. END_OF_DOCUMENT_TOKEN_TO_BE_REPLACED